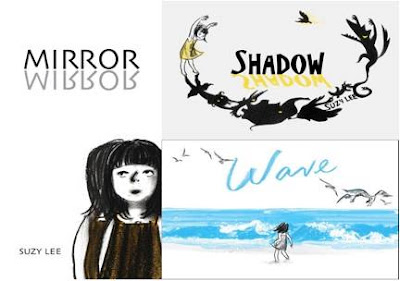 Maria Camila Correa was born in Colombia and relocated to the United States at the age of seven. She received a Bachelor’s in Photojournalism from the University of Florida, with minors in Spanish and Anthropology, and a Master’s in Children’s Literature and Literacies from the University of Glasgow. The following is a summary of her Master’s dissertation. She spends her free time taking photos and on the floor of the children’s section at the local bookstore, poring over the details of newly published picturebooks.

My investigation focuses on Korean picturebook artist Suzy Lee’s Border Trilogy, consisting of three nearly-wordless picturebooks. Each invites us to enter the world of an imaginative little girl, a world divided by the border between two pages. To analyse the picturebooks and derive meaning from them, I called upon the theories developed by Swiss psychoanalyst Carl Jung. His branch of psychoanalysis – analytical psychology – is concerned with the developmental process of the individual psyche, a process known as individuation.
My argument is that each of the books in Lee’s Border Trilogy depicts this process of individuation as experienced by the protagonist. Ultimately, I focus on the girl’s maturation, the changes brought about by the experiences she encounters in each of the books and by the integration of opposite elements. I argue that the application of analytical psychology to the analysis of texts, despite the heavy criticism it has faced, still has something to offer: a fresh perspective from which to penetrate the multiple meanings a text can harbor.

Mirror (2010), Wave (2008), and Shadow (2010) form the Border Trilogy, so called because they each play with the border between illusion and reality, and with the physical borders of the material book – particularly the gutter that forms at the intersection of both pages.

Mirror invites readers to witness the interaction between a girl and her own reflection. Although wary of the other at first, the girl’s curiosity brings them closer, and closer still, until both figures disappear into the gutter of the book. When they re-emerge, each is independent of the other. This upsets the girl, who realizes her counterpart is no longer mirroring her movements, and she gives the other side a push. The mirror falls and breaks, shattering the image of the second girl.

From a Jungian perspective, Mirror illustrates the stages of the individuation process. The overall pattern of one girl, then two, back to one and their movements towards and away from each other reflect the push and pull between the ego and the self during maturation. Figure 1, taken from Alschuler’s chapter in The Cambridge Companion to Jung (Young-Eisendrath and Dawson, 1997), represents the stages of individuation, from “unconscious unity” to “conscious wholeness.”

Figure 1: Stages of the Individuation Process

Humans, according to Jung, are born into the collective unconscious, initially lacking any sense of self-identity. The first stage of individuation occurs during infancy when the ego emerges from the unconscious and becomes the center of personal identity. The second stage is marked by the alienation of the ego, which produces two facets of personality: the persona, the outward-facing identity that adapts to the standards of society, and the Shadow, the inner personality containing instincts and repressed emotions. The third and final stage concerns the reintegration of the ego with the self, which is accomplished through the withdrawal of projections (the integration of the Shadow) and the simultaneous growth of consciousness.

In Mirror, the instant the girl catches sight of her reflection is the moment she becomes aware of her own image, a first step on the journey toward consciousness. The alienation of the ego or split in personality is represented by the introduction of a second entity, that of the mirror image. The girls befriend each other, symbolizing the consolidation of their ego identity. Although both merge completely at one point, the result is emptiness instead of wholeness. Before integration can occur, a confrontation must take place. The following pages witness the struggle between the persona and shadow: the persona embodied by the reflection, a superficial identity, and the shadow manifested in the original image. The reflection represents what the external world sees of the girl’s personality, and this does not always correspond to the actions and emotions that occur within her. This tension between opposites eventually leads to the girl’s rejection of the other, culminating in the destruction of the projection and in the realization of the Self, which “is like that immediacy and simplicity of the beginning, because it is the result, that which has returned into itself…” (Kelly, 1993: 27). This is seen in the parallel between the first and final illustrations, which feature the girl in the exact same pose.

“I have a feeling that the ebb and flow of waves share the same rhythm as books. And above all there is the fact that when we look at the sea we all see the same thing, no matter what part of the world we find ourselves in: children and adults alike play to chase the waves and escape from them. There is an instinctive happiness implicit in that game. You try not to get wet, but, in the end, succumb to the waves.” (Lee, 2014: 40-41)

Wave transports readers to a beach, where a girl, accompanied by five seagulls, playfully engages in silent dialogue with a wave. Eventually, the girl crosses the boundary that separates her from the wave, and joyfully splashes around in the water. When an intimidating wave forms, the girl rushes back to the other side, and, thinking she is safe, sticks her tongue out at the wave. As if instigated, the wave crashes onto the girl’s page. When it retreats, we see the girl, drenched and surprised to find the shells the wave has left behind.

Although she remains an individual in the end – separate from the wave – she is nevertheless changed by it, as it evident by the change in color of her dress and shoes. The shells deposited by the sea could be seen as archetypes, which are, like shells, hollow (that is, they are not determined by content but by form, and exist as an outline of the representation that will emerge once it is brought to consciousness). The girl’s mother, a visual manifestation of the girl’s ancestry, presumably watches from afar as her daughter is inducted into the collective consciousness. Her shoes are also stained blue; she has also undergone this rite of passage.

In Shadow, a girl standing on boxes in what appears to be an attic turns on a light, creating shadow representations of each object in the room, and the girl begins to move and make figures of her own shadow. Slowly, the shadows transform into their own entities, simultaneously causing the ‘real’ objects to disappear from the opposite page. The girl’s shadow becomes a wolf that violates the boundary and crosses into the girl’s realm. Afraid, the girl dives into the jungle land of the shadows. Alone, the wolf begins to cry, until the girl and the other creatures befriend him. Their ensuing celebration is interrupted by a call beckoning the girl back to reality. She turns off the light, but readers observe the shadows come to life again in her absence.

According to Charles Butler (in Reynolds and Grenby, 2011: 174), the shadow is “The place where we project all the qualities that we possess but do not wish to acknowledge, although according to Jung it is also the seat of creativity, and must be acknowledged in order to achieve psychic health.” In the case of Shadow, the creative potential of the girl’s unconscious shadow is evident in the richness of the world she envisions.

The shadow seeks outward expression through projection, or the transposition of something unconscious onto an outer object (Franz, 1998). This is perhaps why the girl’s shadow appears in the form of a wolf instead of her own image: she is projecting (quite literally) her own dark qualities onto other entities. This can also be seen as a continuation of Lee’s game of opposites; she refers to the wolf as masculine (2014), creating several dichotomies: female vs. male, human vs. animal, tame vs. wild.

Jung claims that the shadow is “merely somewhat inferior, primitive, unadapted, and awkward; not wholly bad. It even contains childish or primitive qualities […]” (Hull and Jung, 2014: 134). This becomes clear in Shadow when the wolf begins to cry. He is simply misunderstood, and what had come across as aggression was perhaps only a playful attempt at interaction. The changing attitude of the girl towards the wolf represents successful integration, acknowledgement and respect for its existence. It is no longer a scary monster trying to swallow her whole, but a friend who has gained relative independence and who can be revisited.

The visual dialogue in each book reaches its climax when the two opposing elements merge or come together, diluting the border. In order for this to occur, Lee’s protagonist has to overcome fear: fear of an uncanny reflection, fear of the wave, fear of the wolf. She has to weigh the intensity of her curiosity against that of her fear, and decides each time to honor the former. Each time, too, she is rewarded for her bravery with an experience that breeds moments of unadulterated joy. Lee’s protagonist takes chances, and in the process learns something new, mainly the realisation that things aren’t always what they appear to be. One’s reflection may act unexpectedly, formidable waves may bring tiny gifts, and wolves that seem frightening may only wish to be understood. Jung saw the archetype of the child as closely linked to the process of individuation, claiming that it “paves the way for a future change of personality” and “anticipates the figure that comes from the synthesis of conscious and unconscious elements in the personality. It is therefore a symbol which unites the opposites” (Jung, cited in Pietikäinen, 1999: 229).

Exposure to postmodern picturebooks like Lee’s engages children in abstract thinking from a very young age. One of the primary goals of education is to form a bridge between the student and the world, but also a bridge inward, cultivating identity and self-knowledge. If we agree that this also applies to literature and the act of reading, we can better appreciate the contribution of Jung’s theories.